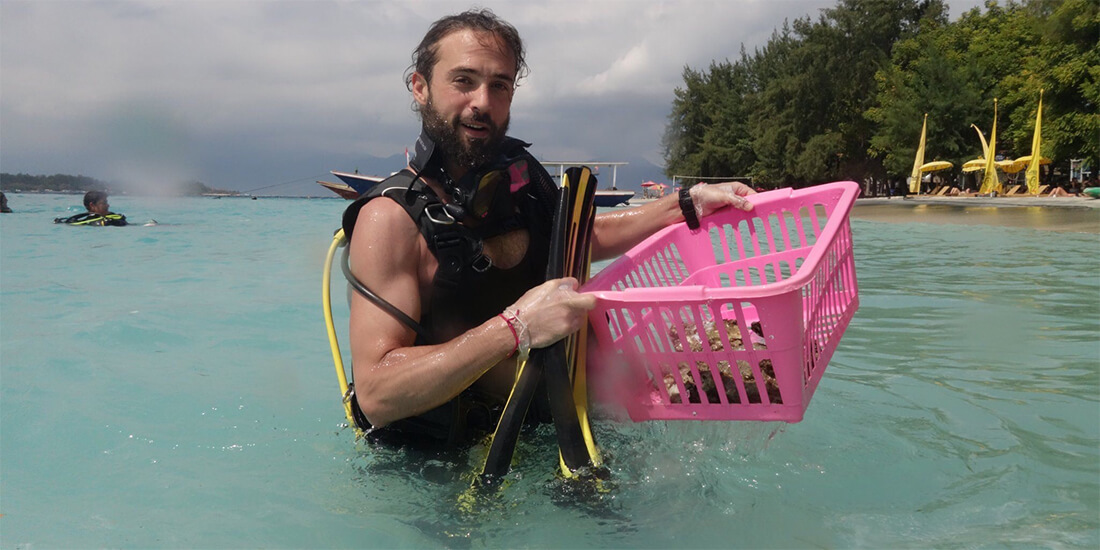 On this little island in the Indonesian archipelago (off the coast of Lombok), with its dynamite fishing and heavy influx of tourists, there have been major wins in the fight against the impending destruction of its reefs.

Yep, a small but relentless group of people devoted to recycling, the environment and the underwater world have turned the tides on the destruction and loss of the marine species that live in their waters. And it’s all thanks to the tenacity of scientist Delphine Robbe, who introduced the first Biorocks to Gili Trawangan.

Biorocks are submerged metal structures that have a very subtle electric current passing through them. This electric current speeds up the attachment and growth of different species of coral that were fastened on to these structures beforehand. With the help of these “artificial reefs”, larger coral reefs can reform and rebuild much more quickly.

In addition to Biorocks, Delphine further increased her chances of success by bringing in other coral rehabilitation techniques, particularly the Ocean Quest/Sea Shepherd method. The creator of this method, the Malaysian scientist Anuar Abdullah, was also distressed by the inevitable disappearance of the reefs. His idea was to create a 100% organic technique where “cuttings” of coral would be grown on living rocks (covered with algae and microorganisms) in coral nurseries. After the cutting had attached itself and begun to grow, the coral would then placed within the main artificial reef, generally situated not too far from the nursery. The results obtained by this method, in the waters of Gili Trawangan, have been extremely encouraging.

When I myself went to Gili Trawangan in 2010, I was shocked to see all the dead coral and lack of life in the island’s reefs. Nine years later, I was surprised to see that even though tourism had grown exponentially on the island (which is never a good sign for coral!), contrary to what I expected, the artificial reefs were doing their job. Even in the most visited sites on the island (usually the beaches), as soon as you put your head under the water, all you could see were reefs with many magnificent types of coral and just as many types of fish!

Now on a Global Scale

Another big victory for Delphine and her team, outside of reef rehabilitation, was creating a recycling culture on the island, not just for the tourists but more importantly for the hotels. Today, the island is no longer plagued by plastic (straws, water bottles, cups) that ends up in the surrounding waters, which can often be the case in Southeast Asia. This growing awareness on land has been extremely beneficial to life and reef rehabilitation underwater, and all this despite the growing crowds of tourists.